Here we are, in the 11th Hour of submission for the 10K Event Apart contest. I just submitted my application, which weighs in at a grand total of 3991 Bytes… or it did, but after I submitted it I was still able to shave off a few more bytes, for a final total of 3676Bytes

Something to note is that I’ve used the Yahoo! BOSS Search API as the source for the images. An earlier version of Pictocalypse used the Google Search API for images… but that was a joke – it returned only 8 results for any search – Lame. 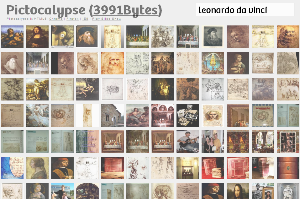 And of course, it got its own website: http://pictocalypse.com

I had another entry, originally a toy a built for my girlfriend Rose – Primocalypse. Unfortunately, I lost track of time and wasn’t able to get this one to where I wanted it. The code base is tidy, but could use some performance tweaks, dom caching, and var declaration namespace cleanup. Also, it’s meant to be used on a mobile phone.