I’ve just returned from the future, and I have a lot to share with you. World news, sports scores, market changes, all that stuff can wait. First, we need to talk about third-party JavaScript.

There’s a great deal of browser technology on the way that will affect the way you write code. Here, I’ll focus specifically on tech that has relevance to third-party JavaScript (3PJS) developers. I’ve editorialized a bit, but this is based on my understanding of how the technology is currently described. To help you out, I’ve tried to keep my own opinion quarantined within sections titled “Recommendation”, and I’ve included references to the official W3C specifications.

Update August 2012 I’ve included a polyfill for the iframe[srcdoc]attribute. Thanks to commenter Corey Goldfeder for suggesting the fallback that makes this possible in today’s browsers.

This is a method for limiting the effect of styling to the element it is defined within. It is used like so:

In today’s (hoverboard-free) world, all the text in the example before would be rendered in red. In the future, the “scoped” attribute on the style tag will limit the effect of the tag to its siblings.

Some applications may programmatically append <style> elements to the publisher’s page. In these cases, there is a danger that the new rules unintentionally affect publisher content. By utilizing the scoped attribute, applications can prevent this unfortunate side-effect.

This functionality isn’t backwards compatible, so you’ll break pages on “old” (by tomorrow’s standards) browsers. To use in production, a JavaScript polyfill is completely necessary.

I would normally endorse using the feature anyway (in order to reap the benefits in supporting browsers). Unfortunately, in order to properly “opt in” to this behavior, your code will need to do more than just declare the scopedattribute. Similar content in disparate locations will require duplicate style elements. It seems somewhat unreasonable to implement such a large change for the limited reward (avoiding an unlikely side-effect in some future browsers).

All in all, I’d say, “Don’t bother.” Stick with namespacing your ID’s and class names; for example, use .widgetname-container in place of simply .container.

This attribute will enable fine-grained control over the capabilities of a document housed within an iFrame. Simply declaring the sandbox property (with no value) on an iFrame will prevent:

You may selectively grant privileges by setting the attribute’s value to one or more (space-separated) of the following strings: allow-scripts,allow-forms, allow-popups, allow-top-navigation, and allow-same-origin.

The main benefit of this feature is security. How you understand (and advertise) this benefit depends largely on how your application is distributed.

If publishers include your application via an iFrame, they have control over the sandbox attribute. This lets them more easily reason about the security risks of including your application. For smaller third-parties (or larger publishers) this will make adoption much easier.

If publishers include your application via a script tag (admittedly far more common), the benefit will be less apparent to the publisher. In these cases, your script is still capable of doing any number of dumb things. But, as the application developer, you can choose to include user-generated content insandbox‘d iFrames. This alleviates many vectors of attack from end users (although, again, it says nothing about the security of your application itself).

As of today, there is no substitute for sanitizing user input. Browser support is not nearly high enough to consider this measure alone sufficient. That said, defense in depth is an important aspect of any security strategy. If you your app could benefit from the sandbox attribute, I’d say, “Go for it.” Newer browsers will benefit from the feature, and old ones will be no worse off for it.

Years from now, we are using this method to declare the HTML content of an iFrame. This will be accomplished by specifying the content as an attribute of the iFrame itself:

By including HTML inside a “sourceless” iFrame (as opposed to emitting it in the publisher’s document directly), you can prevent that content from breaking the surrounding structure (imagine what user-generated content like Hello, world</div></div></div></td></tr></table> could do to the rest of the page). This makes sanitization easier. Instead of escaping HTML, potentially white-listing certain tags (i.e. <b> and <i>), and ensuring that all open tags are closed, you only have to escape the quotation mark character.

This functionality in combination with the sandbox attribute will also make preventing JavaScript-based shenanigans easier.

If you’re anything like me, you probably need a minute to recover from a deep-seated nausea resulting from seeing markup in an attribute. Stick with me for a minute–there’s a valid use case here: you have a string of user-generated markup you’d like to display, and you want to associate it with a specific iFrame element.

The practicality of this approach lives and dies on browser support. Most current browsers completely ignore this attribute, resulting in an unacceptable experience. For this reason, I recommend holding off on using srcdoc for now.

If you want access to this functionality now, check out the following polyfill, which leverages script-targeted URLs in unsupporting browsers:

The seamless property is declared on an iFrame like so:

It instructs modern browsers to treat the iFrame’s content more like inline markup than it would otherwise. Specifically, this means:

The seamless property will allow you to deliver a more intuitive experience to your users because links function as they’d expect. Furthermore, it will allow you to inherit the publisher’s styling, making a more natural integration possible.

This feature shares many of the benefits of the proposed scope attribute for<style> tags, but won’t break publishers’ pages in older browsers. This is not to say it is backwards compatible per se: older browsers will not cascade the publisher’s stylesheets into your iFrames. Keep it on the radar, but it may be best to wait for the time being.

I saw strange and wonderful things on my trip the future. Jet packs. Astronaut food. Dogs and cats living together. Content-Security Policy easily stands out as the most important.

At a high level, Content-Security Policy is a method for specifying from where remote content may be included in a document. It is specified before the document is first rendered–either by a new HTTP header:

…or a <meta> tag in the document head:

Upon receiving this information, compliant browsers will ignore all resources not explicitly white-listed.

The white-list is largely specified on a per-domain basis, but CSP supports keywords as well: 'self' (same origin as website), 'none' (disallow all sources), 'unsafe-inline' (inline script and/or style tags, 'unsafe-eval'(runtime code evaluation via eval, setTimeout, setInterval, andFunction).

Back-end devs will definitely want to read up on the spec concerning implementation details.

In general, CSP will give publishers a method to prevent a broad range of Cross-Site Scripting (XSS) attacks. (The developers at Twitter have written about their early impressions implementing this technology here.)

This is of particular interest to third-party application developers because we largely traffic in cross-site scripting patterns.

If your application displays user-generated content (a comment system, for example), and users may inline images (or any resource for that matter), you will need to host the images yourself. This is because publishers may disallow resources from arbitrary locations on their pages.

Bookmarklets will also be affected. The spec is very clear that bookmarklets themselves should not be subject to a document’s CSP. This is a good thing, because we all love bookmarklets, and constraining them in this way would likely kill them. It’s not all fun-and-games, though. Many bookmarklets rely on injecting img and script tags into the document. For example,the Cornify bookmarklet injects two scripts and an image from the cornify.com domain: 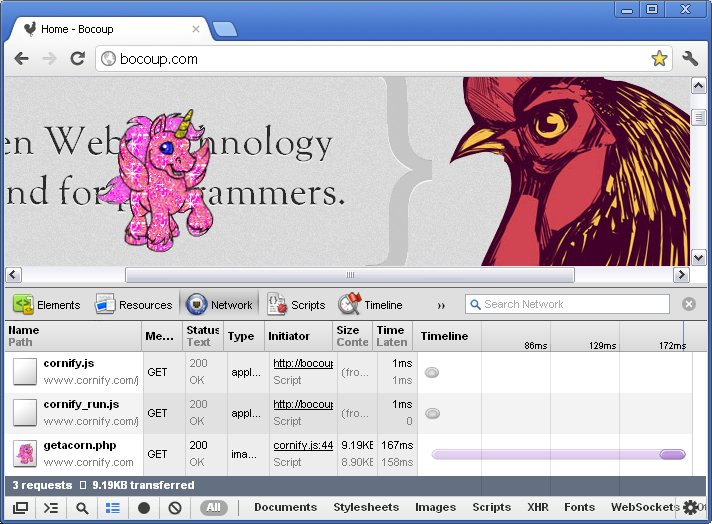 This behavior will no longer be generally achievable on all websites as more and more pages disallow willy-nilly image and script loading.

Most of these restrictions translate to more work for the 3PJS developer. There is one security benefit that we get for free, though: our applications will no longer be tools for DDoS attacks.

Consider the following line of code:

If an attacker managed to sneak this into your app, then every user across all publisher sites would make that request with every page load. When more publishers enforce a Content-Security policy, most of these requests will not be issued in the first place.

Admittedly, I have yet to hear of this attack actually being carried out. But it’s nice to know that 3PJS developers can claim some benefit (however inconsequential) from CSP.

As publishers begin implementing this security feature, they are going to expect a rigorous list of domains required by your application. You’ll need to inspect your application and note exactly from where it loads resources. There are two ways to do this: bottom-up and top-down.

First off, you’ll want to audit your code base and create a list of the domains that external resources are loaded from.

Next, if you do not already run a “dummy” publisher site for in-house development, get to work! (The utility of such a staging environment merits a dedicated article, this is just one use.) Activate CSP on that site, and use its built-in “reporting” functionalityto help identify possible oversights in your initial investigation.

During this auditing process, keep an eye out for inline resources (JavaScript, CSS, etc.) and “eval-like” patterns (described by the specin this section). You will be hard-pressed to convince some publishers to whitelist'unsafe-inline' and 'unsafe-eval' just to get your application running. In this way, you can view following best practices as having direct business value. (It’s true that in some cases, inline scripts are the most efficient way to get things done. For what it’s worth, I personally believe that tradeoffs between speed and security are rarely relevant in front-end development. This is a sign that CSP is making the web a stronger platform overall.)

After your audit is complete, you should update the documentation you distribute to publishers. While it’s generally in your interest to write these rules as strictly as possible, you can easily paint yourself into a corner. Try to recognize the areas you may need to grow (for example, future subdomains), as there will always be friction in getting publishers to change their policies.

The Future is Cool

The novelty and promise of Third-Party JavaScript are clearly reflected in these far-reaching changes that I witnessed while time travelling. Like with any browser tech, there is a bit of a waiting game we have to play while support catches up. Nevertheless, I feel that it’s in your best interest to have a general idea of the up-and-coming technology.

This is certainly not to say I’ve addressed it all. I welcome any insight into other developing standards that I may have overlooked. If you know of any, please share in the comments!

Hopefully I have not created any temporal paradoxes by telling you all this.