At Bocoup, we believe scholarships are an actionable way to promote a more diverse tech community and to provide direct support for under-represented groups to participate in tech events. We began offering Diversity Scholarships this year to the events we organize such as OpenVisConf, CSSConf and TXJS.

With this in mind, we went beyond North America to bring the Diversity Scholarships program to Web Rebels in Oslo, Norway, and now we’re bringing the scholarships to South America with the BrazilJS Conference, which calls itself the biggest JS conference in the universe. The conference runs for two consecutive days on a single track lineup of talks about JavaScript with over a thousand attendees. This year, BrazilJS expects a record of 1,400 attendees.

On a personal note, I have attended BrazilJS every year since 2011. It was then that I made my first contact with Bocoup and met colleagues involved with TC39. I also met many lifelong friends within the JS development community, a few of whom I speak with every day. I would never had ended up at Bocoup had I not attended and felt welcomed, so being involved with the Diversity Scholarships for BrazilJS has been a meaningful way for me to give back to the global JS community.

The process began with the announcement on the event website, and an amazing collaborative effort from the community to get the word out. Many members of the JS communities in Brazil tweeted about the scholarship program, and our friend Leo Beto Souza posted a heartfelt, thoughtful article about his reflections on why programs such as Diversity Scholarships matter on Medium.

BrazilJS 2015 adopted the Diversity Scholarships in conjunction with other programs to promote diversity and have a positive impact on the whole Brazilian development community. They have been a huge success, and here is a summary of what we did. 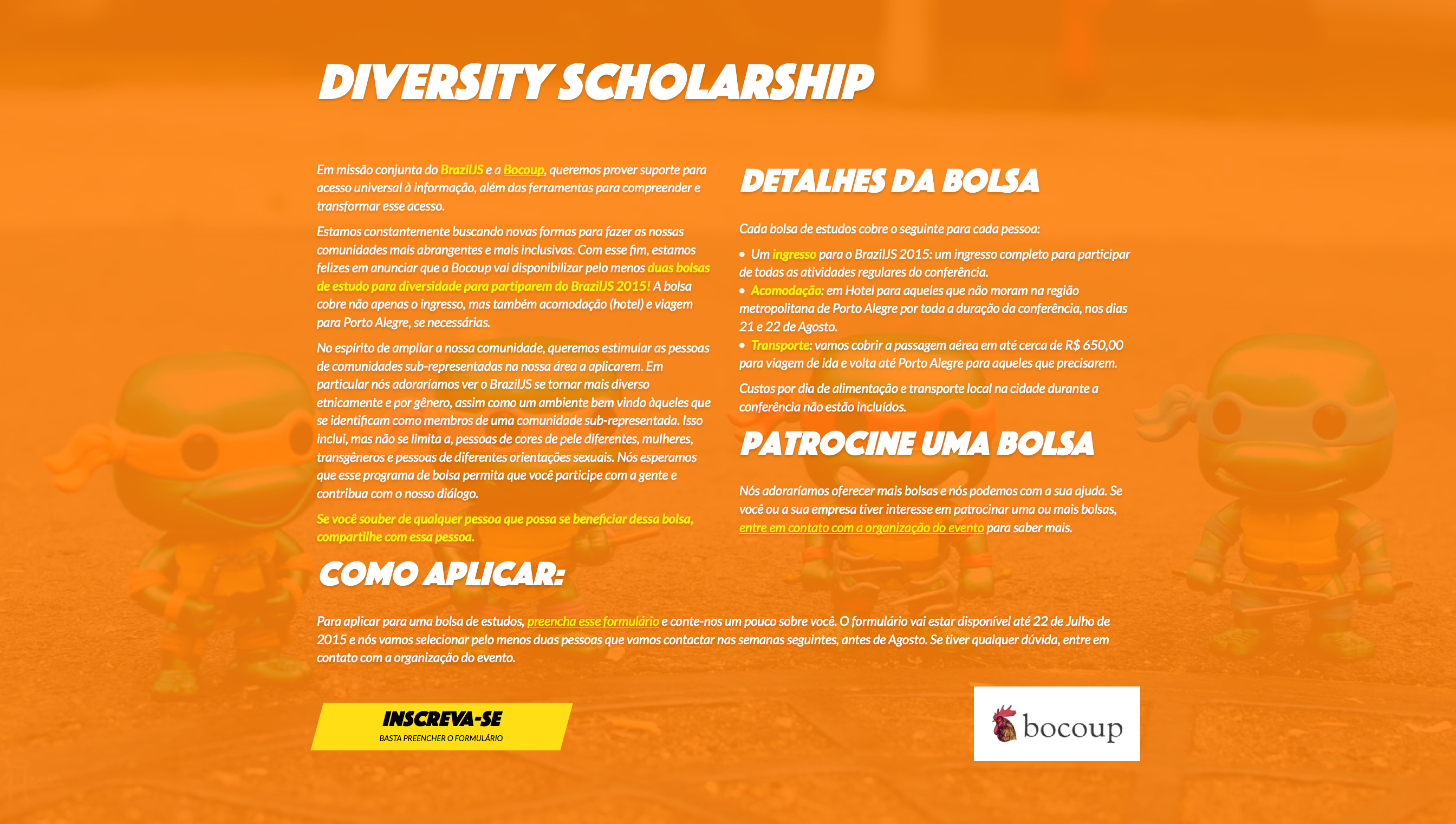 We had over 90 submissions, and over a half of the applicants were eligible for the scholarship.

Within the submissions, many individuals praised the scholarship program and some vented. Some even cited how they finally felt comfortable participating in a technology event as BrazilJS not only offered this scholarship for diversity, but also prominently featured a Code of Conduct.

In order to evaluate the submissions, we established a diverse group of six people from Brazil. The selection criteria took into consideration the unique perspectives the recipient would bring to the conference, as well as how much the conference experience could provide a meaningful impact for the recipient. We prioritized individuals who would not only benefit from attending BrazilJS, but who could also bring value back to any underrepresented communities within the Brazil tech community.

The evaluators did an excellent job and managed to select at least three people for whom we could cover expenses for conference tickets, flight, and accommodation. There were only a few scholarships available for us to offer, and it was incredibly difficult to select among so many brilliant and deserving applicants. We hope this is only the beginning, and that in the future, more companies will sponsor Diversity Scholarships and more individuals will apply.

Improving diversity at tech events is a long work in progress, but we are proud to be part of this progress in Brazil.

We are sure we took an impactful step toward cultivating a more diverse audience at BrazilJS, and this is the among the first steps of a long journey.

Much gratitude goes out to the event organizers, to all of the communities who’ve played a key role in promoting the scholarship throughout Brazil, and the committee members who have devoted their personal time to support this process along with me including: Andrea Balle, Daniel Filho, Andre Garzia, Dayany Espíndola, Jú Gonçalves.