It was more than two years ago now that I first published jQuery Fundamentals, a free online jQuery learning resource. Since then, the site has seen hundreds of thousands of visits — if you’ve learned jQuery in the last two years, chances are decent that you’ve landed on the page at least once or twice.

A lot happens in the world of front-end development in two years, including some big changes to the jQuery library — 1.4 was the current version when the site came out, and there have been four major jQuery releases since then. Those releases brought a slew of changes, including a complete rewrite of $.ajax and friends, the introduction of deferreds and promises, new methods such as .prop(), and a much more streamlined event binding API via .on(). Slowly but surely, jQuery Fundamentals grew out of date.

Today, I’m beside-myself-excited to announce that Bocoup has launched a complete overhaul of jQuery Fundamentals. We’ve rewritten the site from the ground up for jQuery 1.8, drawing on our experience in leading jQuery and JavaScript trainings, and we’ve honed the content to target folks with HTML and CSS knowledge but little programming experience. We’ve also added a built-in editor, so you can try the examples as you learn. 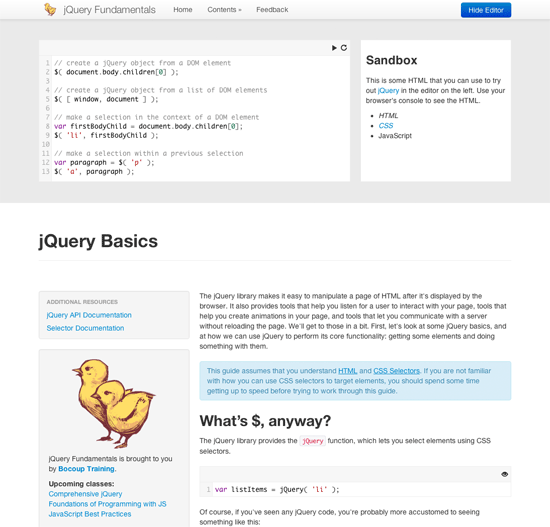 More than a few people were puzzled that the original jQuery Fundamentals didn’t come with a price tag. I believed then that the content was more valuable if it was freely available than if it was locked behind a paywall or in a printed book, and since then, it’s been great to see it become a go-to resource for jQuery learning. Bocoup’s support of the overhaul and its commitment to the open web means that now, you can look forward to a much improved (and much more frequently updated) jQuery Fundamentals, with a price tag still set firmly at $0. We hope you like it.