Earlier this year, I published an article that announced support for running Johnny-Five programs directly from an Intel Galileo Generation 2 single board computer. Since then, a lot of work has gone into fine tuning Galileo-IO, including a complete internal redesign that takes advantage of native I/O bindings and processing capability improvements whenever possible. Over the months spent working on this platform, we’ve built relationships with teams at Intel Labs and Intel’s Internet of Things Developer Program. It was through these groups that we were invited to this year’s Intel Developer Forum (IDF), as an exhibitor representing the open source community, along side the team from Octoblu.

The project would be to make an autonomous, four-wheeled rover. The rover would be able to detect and avoid obstacles while navigating from one geoposition to another via gps signal. All of this would be controlled by a single JavaScript program, running in a stable Node.js environment, directly on-board the Intel Galileo Generation 2 board. The program would use the Johnny-Five framework to interact with the hardware. I felt confident that this set of capabilities was both impressive and realistically deliverable.

Because Johnny-Five is smart enough to figure out that the program is being run directly from the Galileo itself, the previous code produces the same result as the following:

The minimal breadboard view serves as a starting point for the hardware that I’ll introduce as the rover development progresses. Note that the board shown is actually the Galileo Generation 1; at the time of this writing I was unable to find a Generation 2 breadboard image, however the program has been run and confirmed for correctness on both platforms. 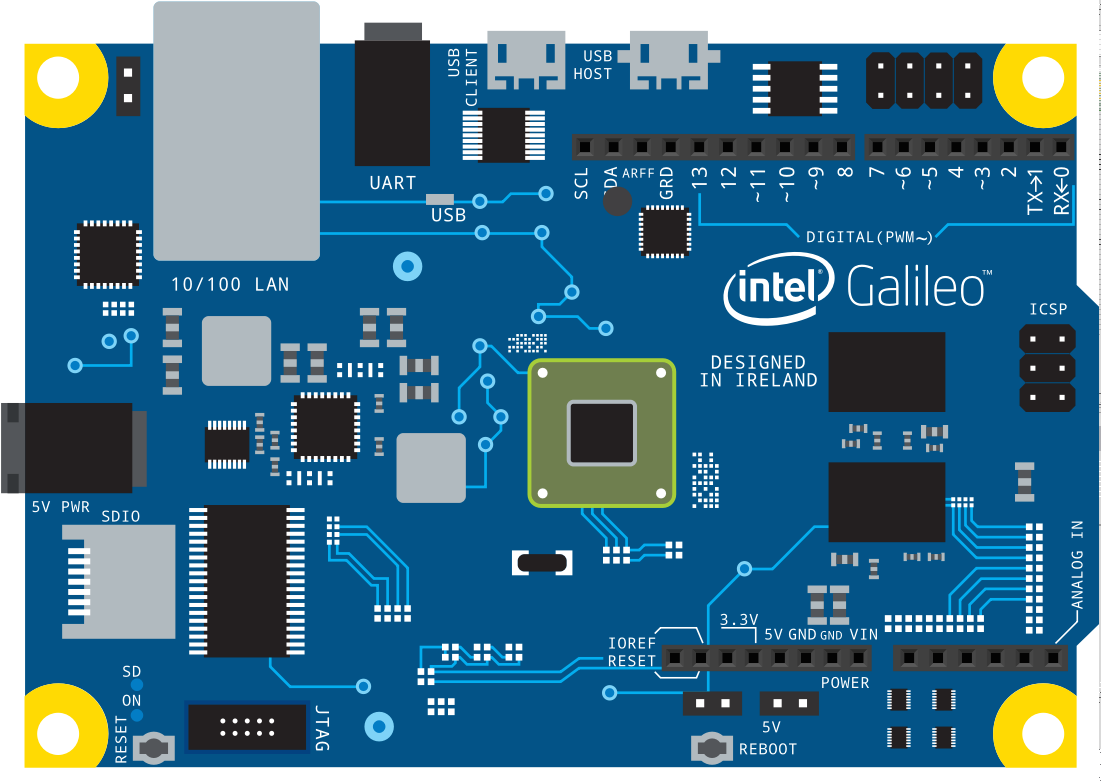 The rover’s power circuit begins with a Turnigy nano-tech 1300mAh 4S 25-50C Lipo pack battery source shared between two battery eliminator circuits: 12V 3A for the Galileo and 6V 3-5A for the servos. To calculate the run time this will provide:

The Galileo is equipped with a mini-PCI Express slot, so I installed an Intel® Centrino® Advanced-N 6205 coupled with a Half to Full Height Mini PCI Express(PCI-E) Card Bracket Adapter and antenna. Installation instructions are out of scope for this report, however Sergey Malinov published an excellent walk through. During early development, I preferred connecting via ethernet cable and recommend others follow suit; doing so reduces the amount of heat produced by the board while offering a quicker and more readily available connection to the board. For actual test runs, connect to the Galileo via ssh over wlan. (Sublime Text 2 (or greater) users should install rsub, which allows you to open remote files locally, in Sublime Text.)

Using only Lego Technic pieces from two combined Lego NXT kits, I framed a rough design for the chassis and locomotion components. The rover’s drive system is composed of a single HSR-1425CR Continuous Rotation Servo, mounted in place with a Hitec Standard Servo Mounting kit. Space and limitations of the servo horn adapter resulted in a 2.25:1 Drive (36 tooth) to Follower (16 tooth) gear ratio for the rear-wheel drive system. The 2.25:1 ratio is inappropriate in that it provides speed over torque—in some cases this is desirable, however this machine as a whole is relatively light and would benefit in surface navigational versatility from greater torque. In simpler terms, with too little torque, the rover would struggle on rough or uneven surfaces. 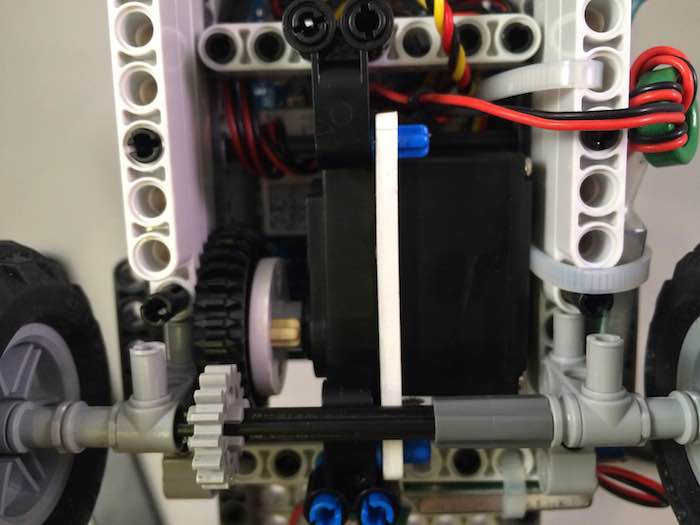 For the steering component, I avoided the common three-wheeled (two drive, one balance) differential-drive system, and instead created an Ackermann-style design. This makes the steering apparatus less central to the overall design, granting me the flexibility needed to craft a non-circular, non-square chassis. This, in turn, results in better maneuverability and stability. 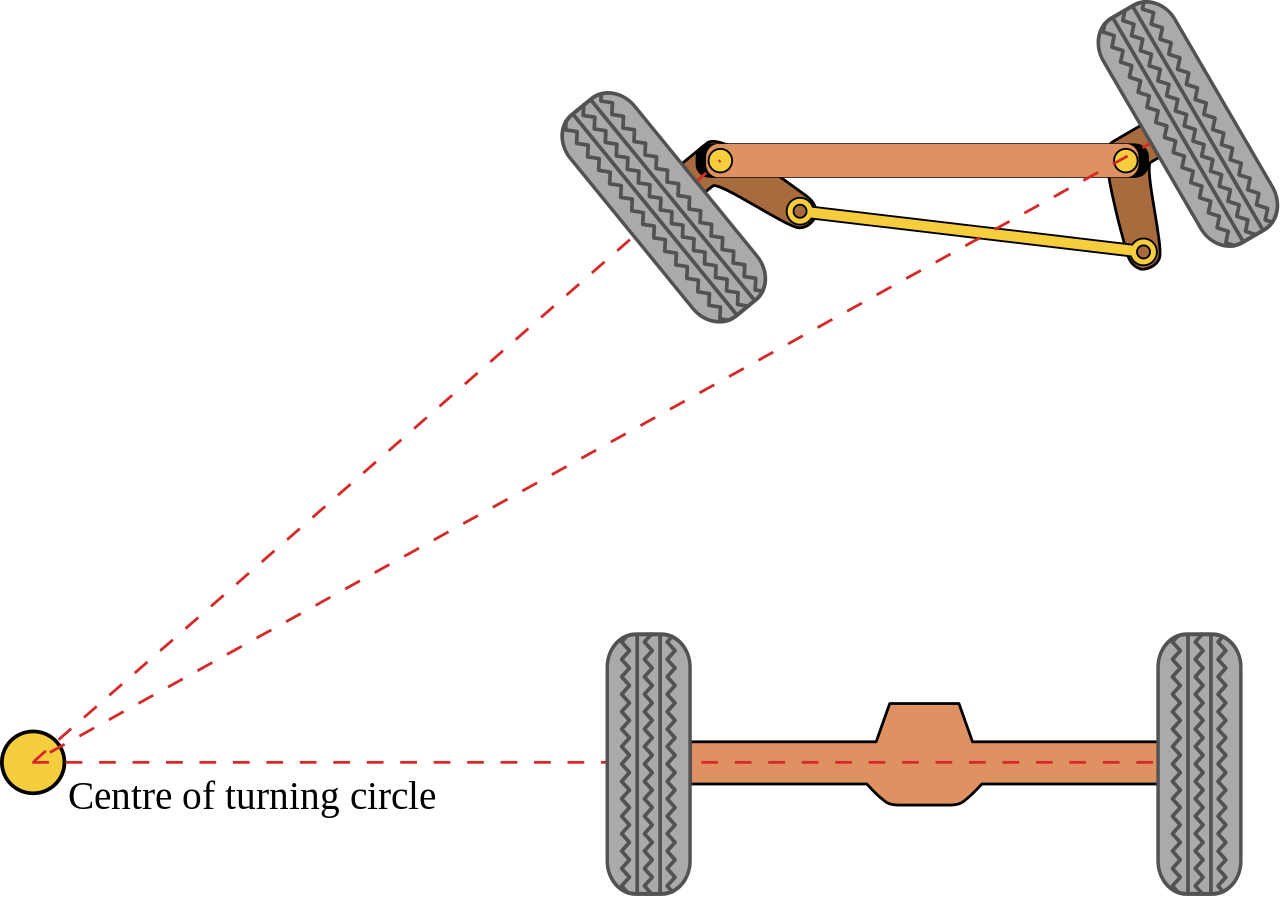 To control the servos, I updated the program to initialize two Servo instance objects, one continuous and one standard:

This is the breadboard view updated to include the two servos connected to pins 9 and 10, with an external power source and a common ground line from the source to the Galileo. 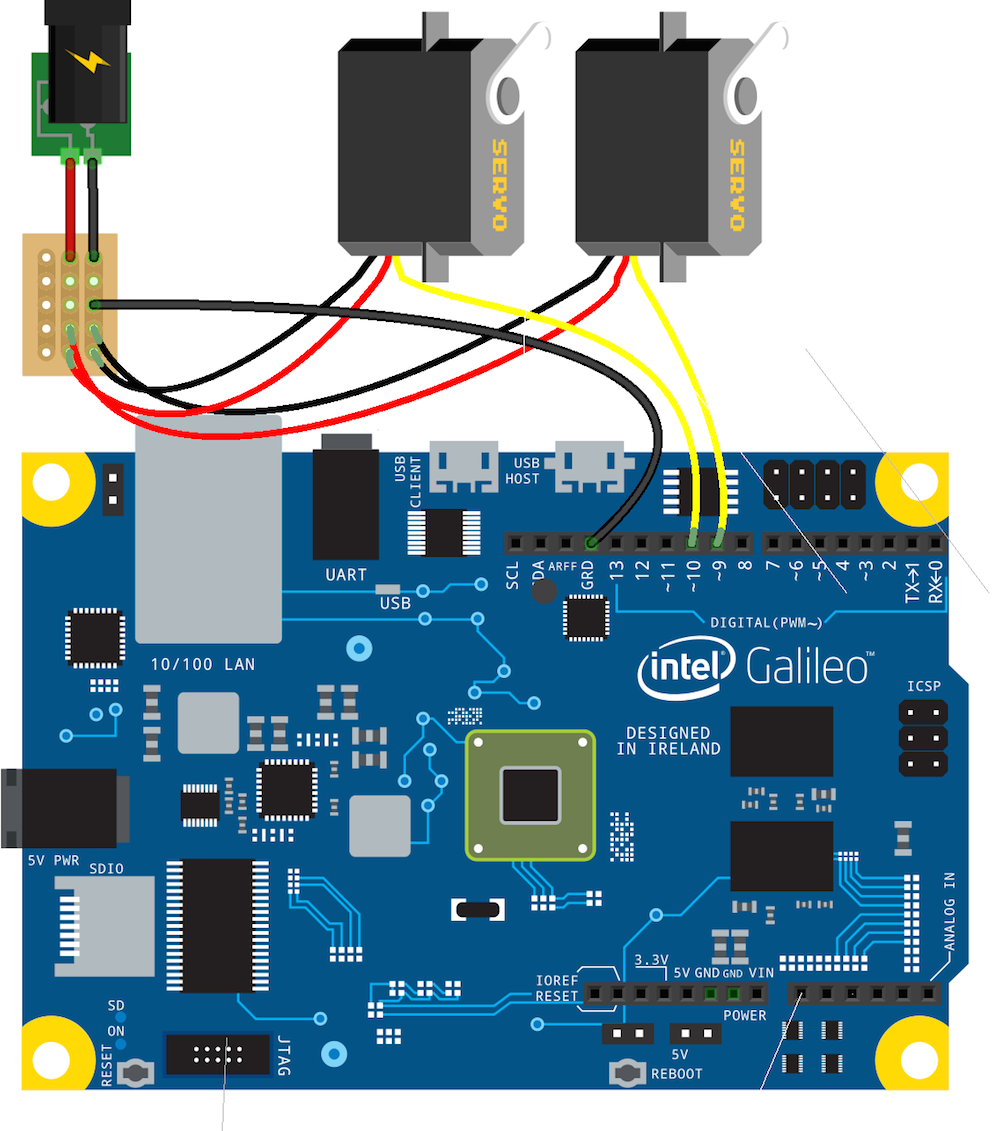 The previous portion of the program included comments that listed the steering angles; those three values correspond to the following three images: 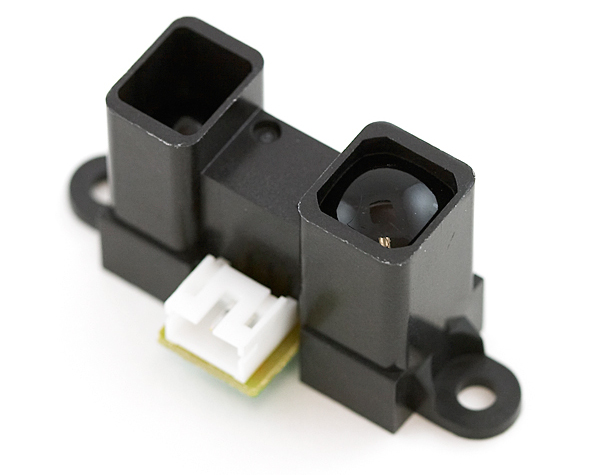 (Click here for details on how these sensors operate)

For this machine, the sensors will be arranged such that the left and right sensors cross each other (with a slight height offset) and center sensor will face forward. An earlier configuration had the sensors facing out and away from each other, which produced larger dead zones to the left and right of the middle sensor. Crossing the IR beams, as shown below, reduces the size of those dead zones. (It may be rare in a lot of engineering projects, but in this case it’s actually preferable to cross the streams.)

The left sensor is rotated 180° so that its light emitter and light detector placement matches the sensor on the right, with the emitter on the outer-most edge of the mounting arm. 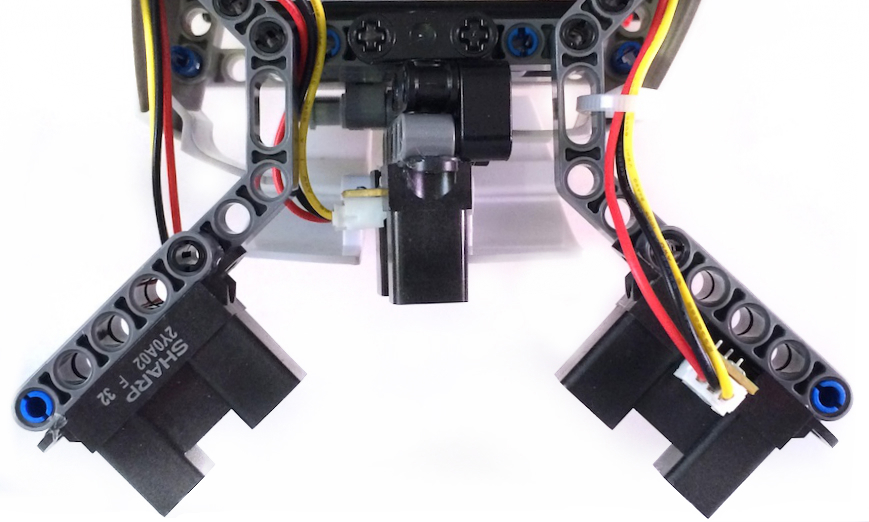 Introduce the three sensor objects to the program, according to the sensor arrangement shown above: 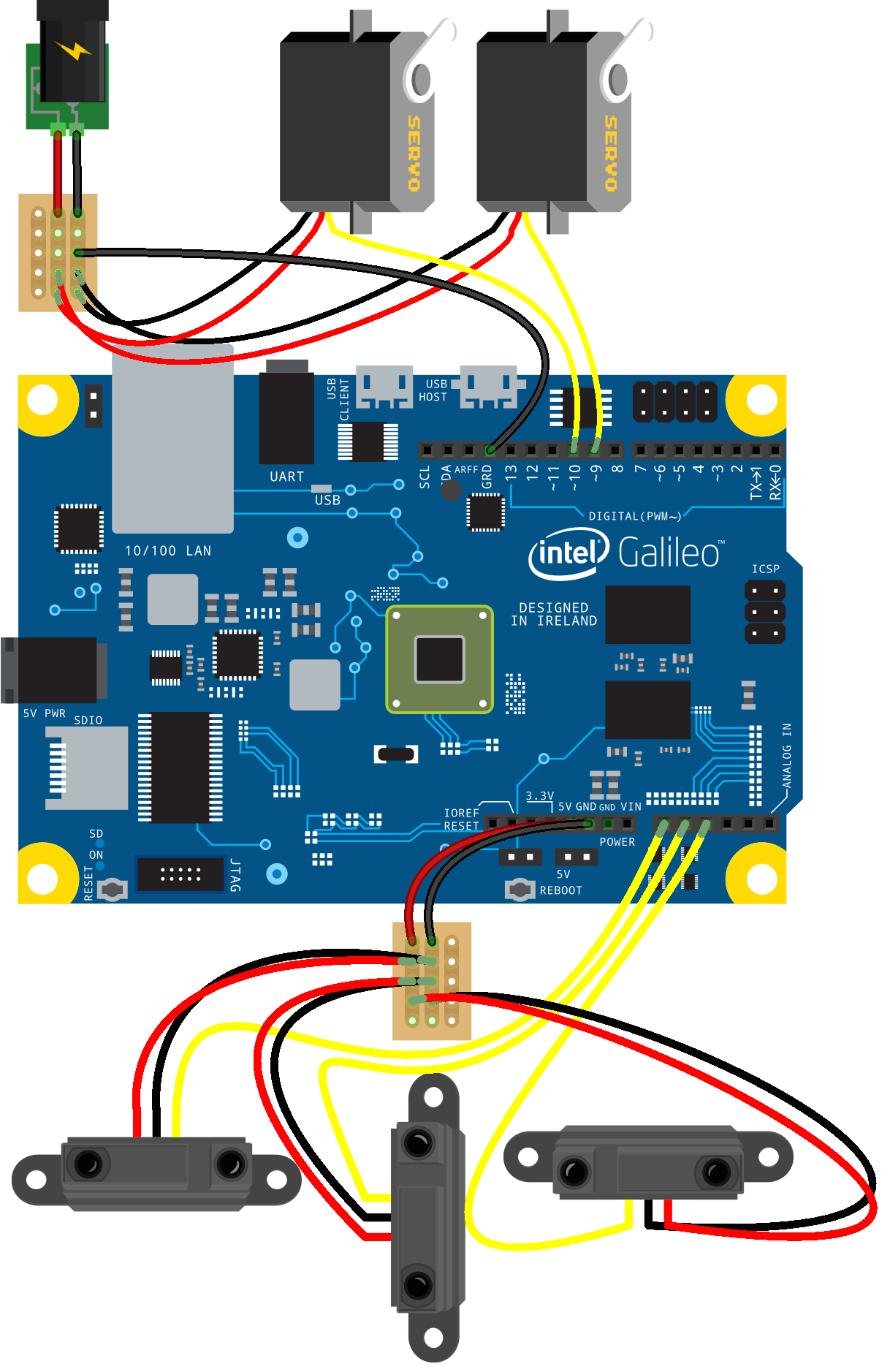 Now that I’ve implemented means for both input and output, the next step is to define a simple state machine. “Simple” was the driving factor for deciding which library to use and I ultimately selected Jake Gordon’s javascript-state-machine. The basic machine looks like this:

Now that the states are defined, the program needs a mechanism to asynchronously process distance readings and transition state based on the results of the current environmental data. In other words, it needs to move and avoid obstacles.

Now that locomotion, obstacle avoidance and state transition processing are implemented, I could focus on implementing navigation from one location to another by latitude and longitude coordinates. To accomplish this, I’ve added an I²C magnetometer compass to track the heading and a GPS Receiver to track the rover’s current position coordinates.

The GPS Receiver is a serial device that receives coordinate data from up to 66 satellites as standard NMEA sentences. To make the data available to the Node.js environment, simply connect the GPS unit’s TX line to the Galileo’s RX0 and the data will stream directly to /dev/ttyS0. To consume this data, I created a simple GPS class that initializes a stream by opening the serial port, creating a read stream, and accumulating the available data chunks until a valid (ie. RMC or GGA) sentence arrives. Once a valid sentence string is collected, it gets parsed using James Penn’s node-nmea module.

Back in the rover program code, I made sure to add an appropriate var GPS = require("./gps"); at the top, and then in the body of the program:

Before introducing the turn-by-turn navigation code, the rover will need a compass device to track its own heading. I had a Triple Axis Magnetometer (HMC5883L) available, so this device was used.

This is the last update to the breadboard view, adding both the compass and GPS components: 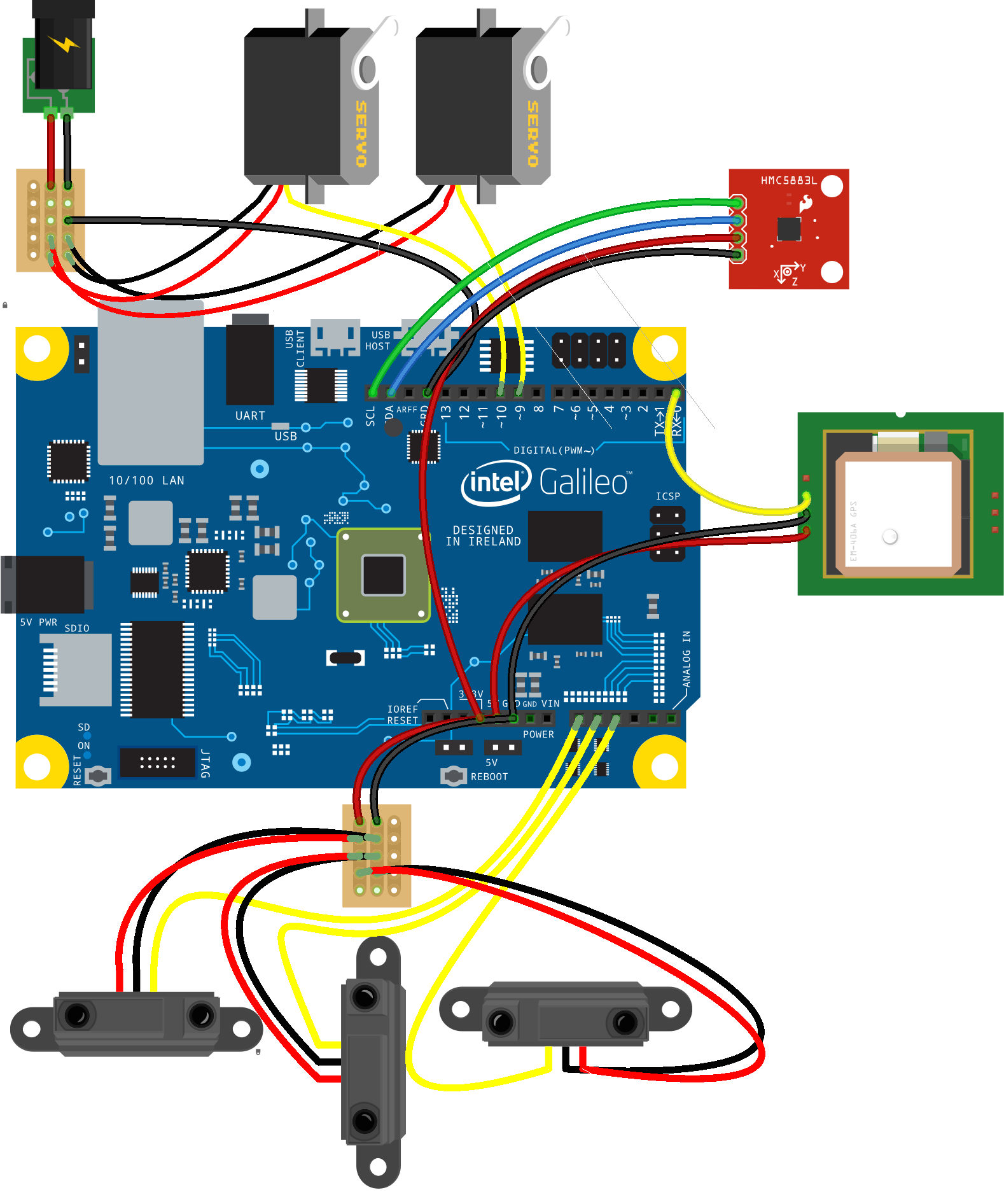 And here are the components as mounted on the rover itself: 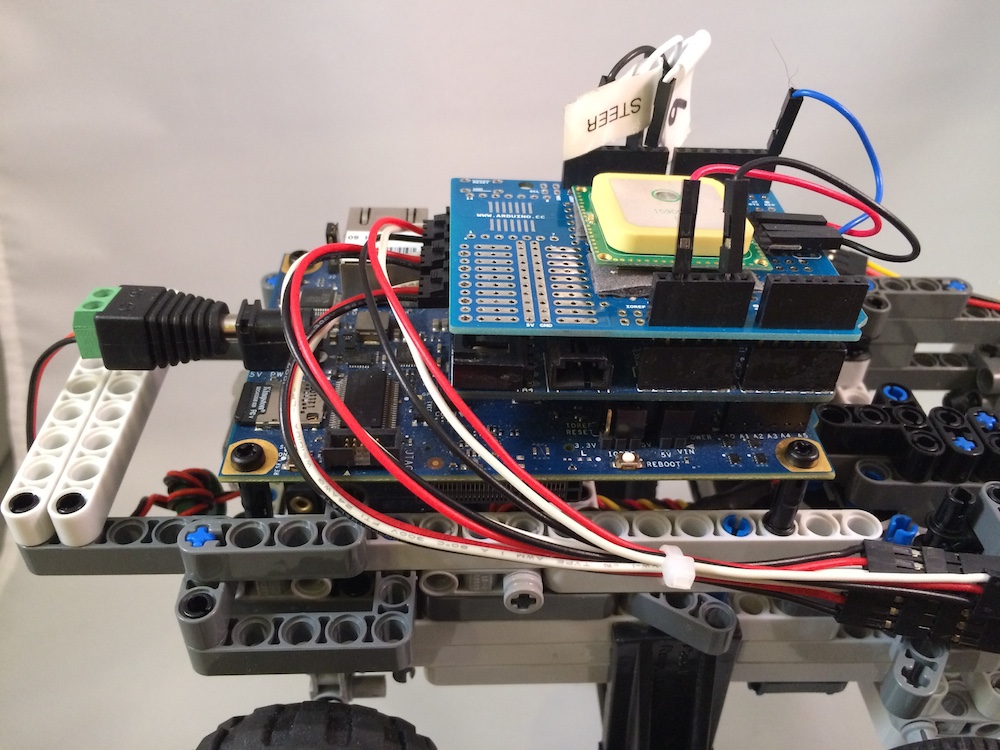 This chart illustrates how the turn-by-turn instructions (as state events) will be computed: 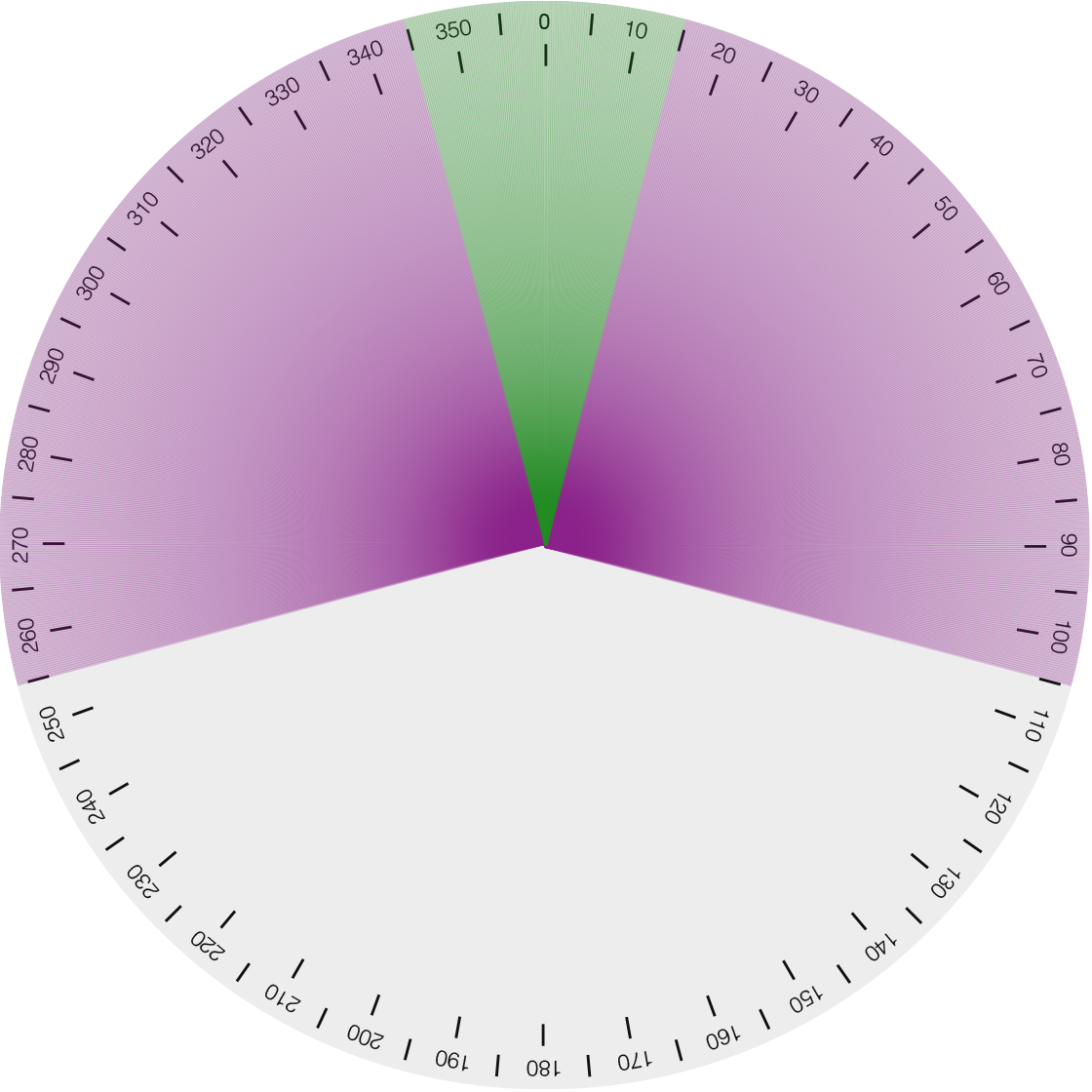 These angles were determined by observing the horn angle of a servo protractor with a mounted compass (the same used in the rover), while orienting myself toward the Brooklyn Bridge.

The GPS data handler is invoked to process changes in the latitude/longitude coordinates as they are received, but will defer control of the rover to either manual control mode or the obstacle avoidance system. Turn-by-turn navigation can make course corrections as needed, as long as the travel way is unimpeded.

Here is a gallery of images documenting the final form of this iteration of the rover project: 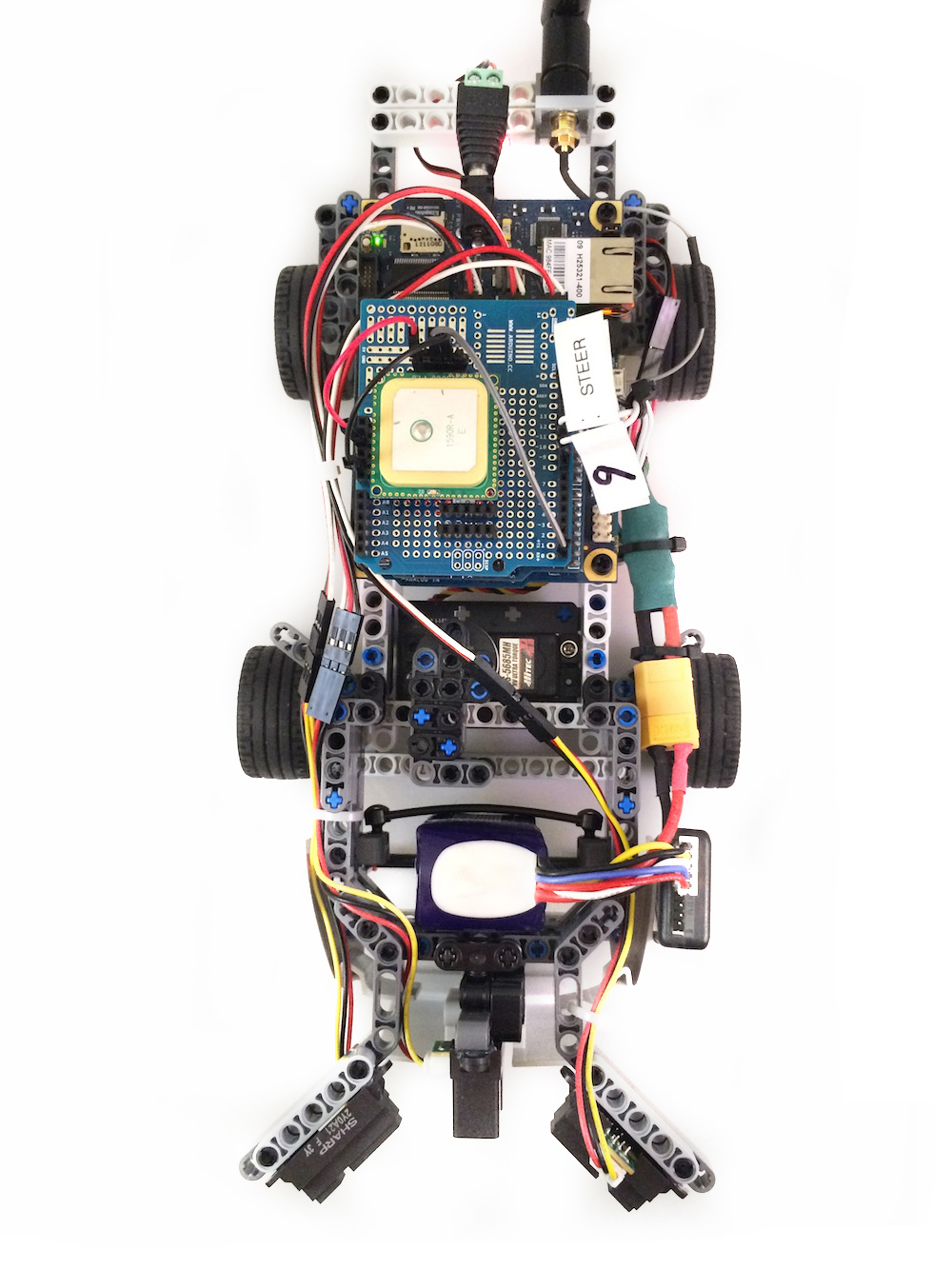 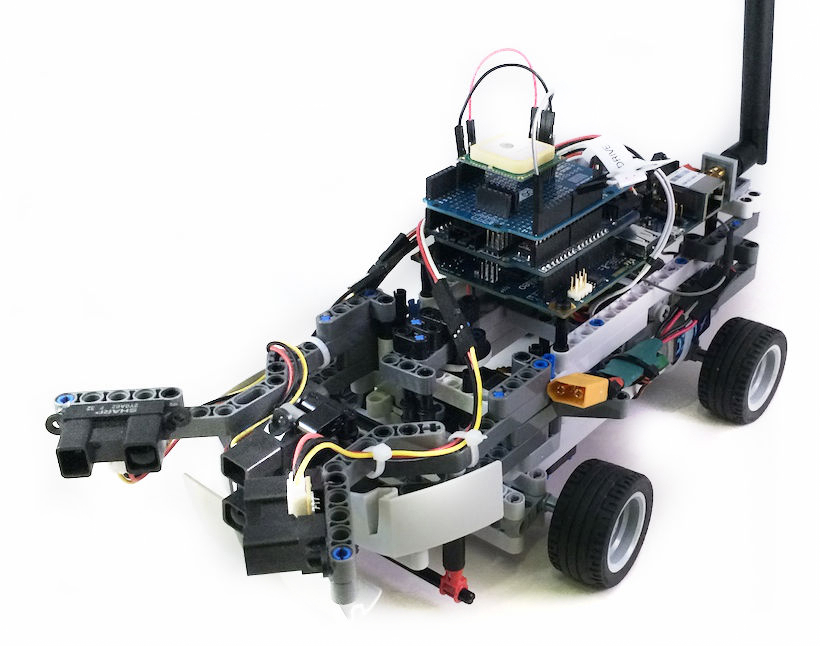 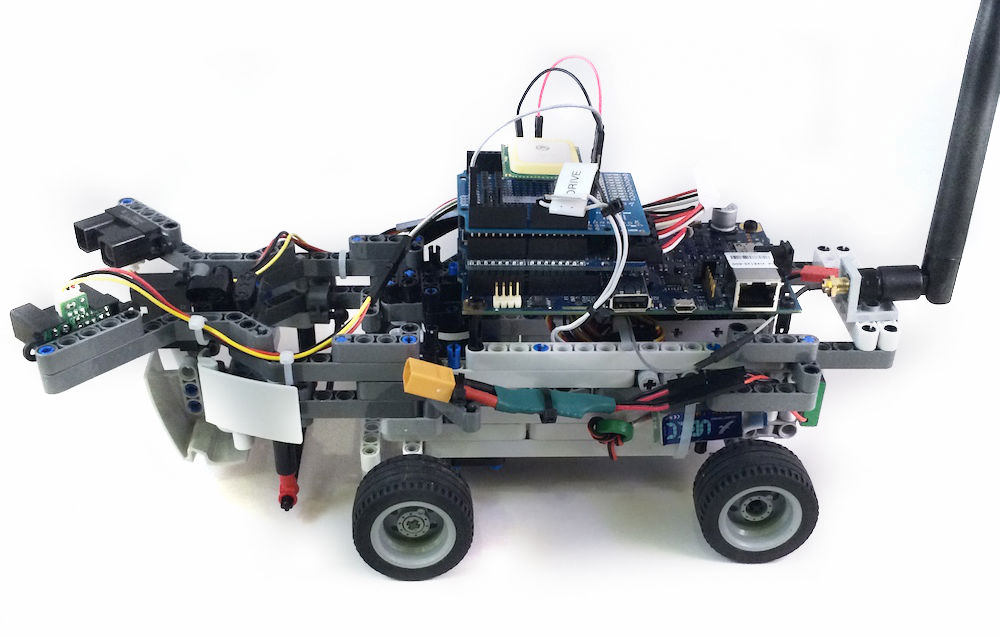 The purpose of my work on Johnny-Five has never been to prove that JavaScript is necessarily better for robotics programming, but more realistically that it’s capable. Through the development of exploratory projects like this and others, the evidence in support of this continues to grow.