For a recent consulting project I was attempting to render some fairly complex skeletal animations in WebGL on Firefox and Chrome. I quickly ran into a situation where the animation was rendering on Linux and Mac computers, but not on Windows. All the test machines had up-to-date graphics drivers, but the Windows machines threw a “too many uniforms” error when attempting to link the shader programs. So what does this error mean, and how do we fix it? In this post I’ll share the results of my research that allowed me to get everything working.

So what is a uniform? According to the OpenGL wiki, a uniform is “a global GLSL variable declared with the ‘uniform’ storage qualifier.” To be a little more specific: your shader executes on the GPU, which is physically distinct from the rest of the computer, separated by a bus. This means there’s a very limited amount of data that can be shared quickly between the GPU and your web browser. A uniform variable is what lets you declare “this is data that is exposed externally for transport over the bus”, and there’s a specific API on the JavaScript/WebGL side that lets you get and set this data. For example, you might declare the following variables at the start of a GLSL vertex shader:

That shader has, you guessed it, three uniforms. Later, in your JavaScript program code, you might access, transform, and return one of the uniforms like this:

If you’ve ever used web workers, this data flow should be familiar to you. This is for good reason: we’re simply doing parallel computing here, but instead of the shader code running on a spawned worker thread, it’s running on the GPU.

How Many is Too Many?

So, we know what a uniform is: it’s data that’s transferred back and forth between the GPU. Because the GPU is physically distinct from the rest of the computer, we are severely limited in the amount of data that we can quickly push back and forth over the bus between the CPU and the GPU. So we need to watch our uniform usage very closely, and we need to understand that different combinations of graphics cards and graphics drivers allow for different uniform caps.

When it seems like I’m hitting a performance limit, the first thing I do is benchmark my system. Fortunately, webgl-bench is a great website that can benchmark your WebGL performance in seconds, giving you a lot of statistics that can be valuable for debugging. For this problem in particular, we’re interested in the value returned for MAX_VERTEX_UNIFORM_VECTORS. As you might imagine, having more active uniforms than the maximum is what causes a “too many uniforms” error.

Running the benchmark on Mac, Linux, and Windows machines highlighted something odd: while most of the Mac and Linux machines capped out at 1024 uniforms, the Windows computers supported only 256 vertex uniforms, even if they had amazing graphics cards and the latest drivers.

This is due to a peculiarity in how Chrome and Firefox render WebGL. In Mac and Linux, the browsers render WebGL directly, using native OpenGL drivers. The problem on Windows is that the native OpenGL drivers are notoriously unstable, causing sometimes massive performance hits. To avoid these problems, the Windows versions of both browsers default to using ANGLE, which translates OpenGL ES 2.0 API calls to DirectX 9 or DirectX 11 API calls.

The problem is that the ANGLE configuration currently used by both browsers uses DirectX 9. The DX9 configuration imposes an artificial cap of 256 vertex uniforms in use at any given time, no matter how good the graphics card is. Users can manually disable ANGLE (more info here) but it’s an onerous process only meant for developers; you can’t expect an end user to do it.

Fortunately, an upcoming Chrome release (version 34 or possibly earlier) is going to default to using DirectX 11, which should increase the cap to 1024 maximum vertex uniforms. You can follow the tracking issue for this feature here. Firefox is actively looking into doing the same, but they don’t have a timetable yet.

So now I needed to figure out how many uniforms I was using with my complex model. Obviously I was using more than 256, but exactly how many more?

After a bunch of research, I wrote a function does this for you. You pass it a shader program and it returns an object containing useful data.

Here’s the code for the function:

It returns an object containing the following data:

Here’s some sample output using console.table (more info on that function here) to show the information from the returned object’s uniforms array. This is data from my original, complex model: 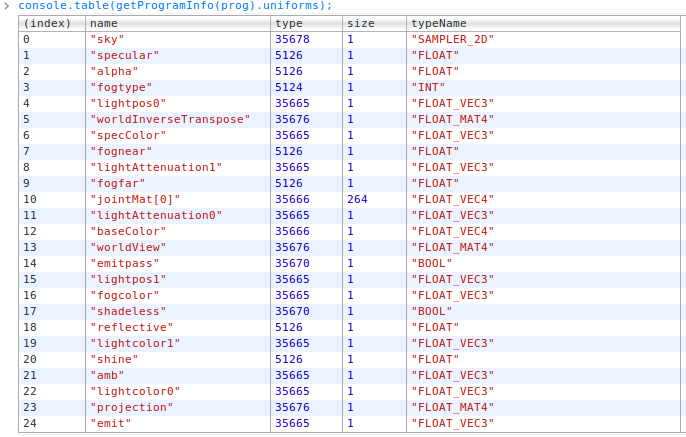 Looking at this I was able to immediately discern that we had 288 active vertex uniforms, and most of them were in the joint matrix (aka the complexity of our model’s skeleton). This helped me tell our artist that we needed to reduce the number of joints in the model by about 20% for it to work on Windows machines.

Here’s a live code sample that uses some of the code from the basic Learn WebGL tutorial, but with my getProgramInfo function in there, logging output to the console (requires WebGL):

Assuming your browser supports WebGL and you can see the rotating shapes, if look at your console output, you should see the object in question, reporting 2 uniforms and 2 attributes.

I hope this clarifies how uniform limits work in WebGL and helps you stay under the limit!