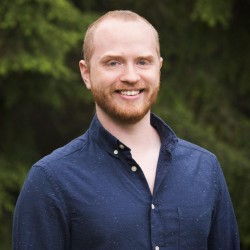 Alex taught himself to code in Taipei, Taiwan in 2012, splitting his time between teaching English at cram schools and planning his startup, Hacking English, in the back of quiet coffee shops. His startup never materialized, but he was enraptured by programming itself. His captivation finally became a career in Melbourne, Australia in 2016, when he became a web developer at a Wordpress website factory, helping designers churn out dozens of websites.

His attention gradually focused on the web itself as he realized many of his dreams about the future of technology and society required new leaps within the deepest depths of the technology stack. This was the thread that led him to Bocoup in 2021.

He is interested in the capacity of the internet to imagine and create, and he remembers the promise and hope he felt as a kid, sneaking downstairs with his brother to build civilizations on the family computer while his parents were asleep. As a reflection of us, he hopes the internet can soon find a path for itself.