Facebook has had a lot of press recently. Growing by a million users a day, playing the patent game like every other large corporation, seemingly constant legal-disputes over ownership, and to top it off.. the Facebook movie called “The Social Network” will be hitting the big-screen this October.

A lot of people in the internet industry will tell you “Facebook has problems”. It does. One example was the whole fiasco around Facebook giving away too much of it’s user’s information publicly.

One of the by-products of the the social-modernization of Facebook in the last few years, has been the Facebook API. As well as being a very useful tool to connect services on-line, the API allows developers to mine incredible amounts of information, which led to demonstrations like OpenBook.

For example: if you were to type “I cheated on my wife” into the search box, you get a list of guys who have cheated on their wife and talked about it on their Facebook page. Click here for a list of douchebags.

The beautiful (and tragic) thing about this is… most of the people writing “I cheated on my wife” on Facebook… have absolutely no idea that this information is public! This is a broad problem that spans the web world wide: the average internet user does not really understand the risks of using the services they have come to love.

“They ‘trust me’. Dumb fucks.”
– Mark Zuckerberg, Creator of Facebook

Facebook have made good efforts to protect users by explaining the privacy settings, and giving them a range of options to control their data; but in a society that clicks “OK” before it reads the dialogue, the problem is difficult to avoid. The political and social issues that could arise through such electronic ignorance are hard to fathom.

In America this issue could lead to losing your job. If you take a sick day and then leave public information online, about how you had a wonderful time at the theme-park with your kids, you put your job on the line. In other countries a public religious or political affiliation could cost you your life.

While at the Mozilla Summit 2010, Jay Sullivan asked the question:

“Why do Facebook get to own our connections between our family and friends?”

I decided to leave Facebook, posted on my wall that I would be leaving in two weeks and created a form for my friends and family to fill out so that I could stay in touch with them. 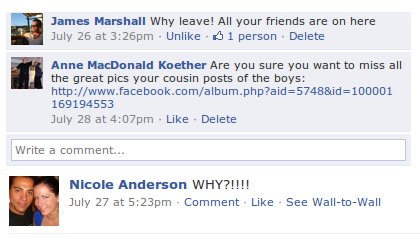 Even my non-technical friends were clued up enough to ask “Don’t you want to use Facebook to increase your social presence?” They were right, I should be using Facebook to my advantage. Living in a different country to almost all of my friends and family, Facebook also plays an important role in connecting me to the people that are important in my life.

I decided not to commit Facebook-suicide.

The social questions raised at the Mozilla Summit were accompanied by some very inspiring ideas. The idea that my mind latched on to was the concept of “Social Primitives”, a scientific term to describe the basic units of social networking. What are the basic, scientific social-primitives neccesary to describe all the kinds of relationships we have as human-beings?

When we understand what these social-primitives are, how can they be used to build online services in which a “person” is a decentralized entity, who’s relationships are are not bound to one service or another?

I have been pondering on this for a while, and I have a few ideas of my own. I stopped thinking in terms of services and started thinking in social-primitives, creating “PXML”, a data-scheme to describe what I think makes a person… a

I decided that two important social-primitives that every person must have are “identity” and “relationship”. I then added various kinds relationship-primitives like

Imagine for a moment that your web-browser held your Personal-XML locally. You could use your PXML file to log in to all your services such as Facebook, Myspace, Github at once!

You would then be able to see all of your connections across all of your social networks in one place and have them correctly grouped with a slick UI in the web-browser. You could then chat with your personal connections, share photos or play games online with people who are signed in to the same online services, whether it be through Facebook or otherwise.

Let’s say that the system discovers that “Uncle Jim” is on MySpace and that it is 97% probable that he is your uncle because part of his relationship-fingerprint directly matches part of yours (he is connected to your mother as her brother). Then in a fashion similar to Facebook, you could send a “friend request” to your Uncle and your uncle could then have access to the parts of your PXML data that you define to be appropriate information for close family.

Mozilla have done some great experiments in this area. This video from the Mozilla Summit 2010 demonstrates how powerful an open-web social platform could be.

It is hard for me to predict what form an open-social-network will take in the future, but we are clearly going to see mammoth changes in social software over the next few years. If corporations that are as devoted to the Open-Web as Mozilla remain involved, I think the future is bright for for the end-user.