Npm By Numbers, an Analysis and Visualization of the npm Ecosystem

Many of us use npm on a daily basis to manage our server-side and client-side dependencies, but do we know what goes on behind the scenes? What does the npm ecosystem look like from 10,000 feet? We set out to answer some of those questions in September of this year and are really excited to share some of our findings with you today in the form of Npm by Numbers.

At this point we encourage you to click through to the visualization itself. If you’re interested in the nuts and bolts, keep reading. 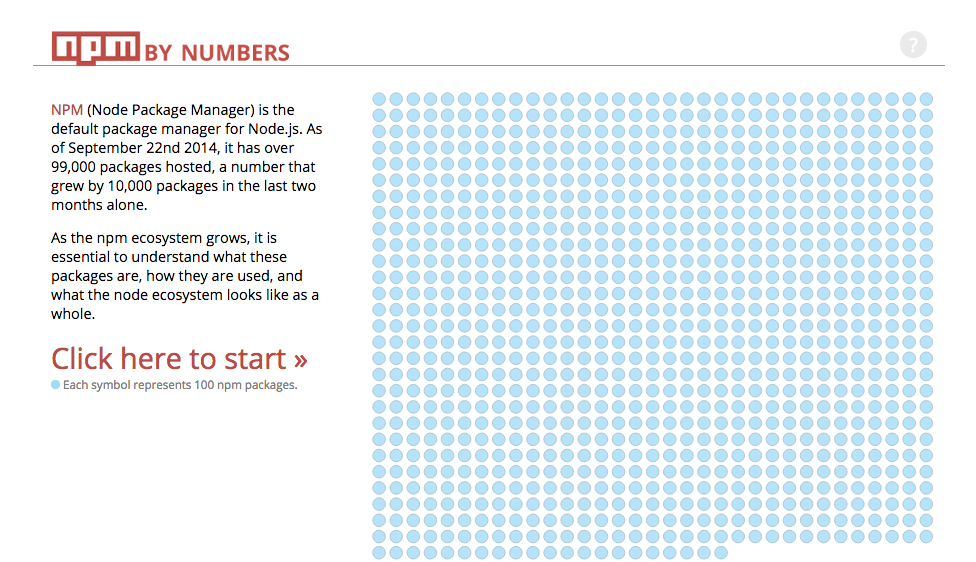 In September we made a local clone of skimdb, which is npm’s CouchDB instance containing all the packages (sans their compiled code). It makes it an ideal resource because the size of the data is fairly small and yet it is very complete. You can see our instructions on how to create your own skimdb replica in this github repo.

At the beginning of this project npm had just under 100,000 packages. As of today, it already has 110,362 packages! It’s grown very fast, even during our development.

Before we were ready to analyze our data, we had to actually transform our CouchDB replica into something we could parse and manipulate more easily. All of our data pipeline work can be found in this repo.

We started out by extracting all the documents out of couch and onto the file system.

Then, we proceeded to compute a variety of subsets and new datasets that cover dependency trees, keyword graphs, all releases and most importantly package metadata.

The main data file powering this visualization is generated using various subsets of this data as you can see here.

We conducted our initial analysis using the Python language. There are several incredible Python libraries that allowed our data analysis to happen fast and be comprehensive. They include:

You can see all of our analysis in the analysis folder of the repo. We’ve used iPython Notebooks to conduct most of our “data digging” (more on these in a minute).

The npm dataset is fascinating! There were so many more questions we asked than we’ve had time to answer, but here are a few tidbits you can see in the visualization itself:

There’s a lot of discussion about semver these days. Does it mean anything? How should developers version their packages? Is the 1.0 really a big deal? Well, we aren’t going to try and answer this for the entire community, but here’s what we found:

What we’ve found looking at the dependencies is that:

Npm has been around for several years now (more than 3!), so data on package age makes fertile ground for analysis. The most evident fact in the package age data is that npm is growing very fast! Over half of the packages on npm (57%) have been created within the last year.

You can see a summary of the analysis in the visualization in this iPython notebook output.

We used d3.js and d3.chart pretty heavily in this project. There are three new visualizations that we wrote with d3.chart’s help:

Where are we now

We’ve been asked several times “can you just update this nightly?”. This is a loaded question because it has two answers: yes and no. Technically we can easily deploy our scripts and chain them together. However, there’s a pretty high level of abstraction and analysis applied to the data to then determine how to tell this story. We chose to create an interface that offers an exploration of the data but also shares some insights, and those might change. For example: what if after 6 months some of these facts are no longer relevant? The fact is, npm will change. Npm By Numbers is a glimpse into how it looked on September 22nd of 2014.

What can you do:

We’ve only scratched the surface. If you’re interested in exploring the npm ecosystem further, here are a few pointers:

This is a small glimpse into the kind of data visualization work we do here at bocoup. We’d love to help you visualize your data! Get in touch hello@bocoup.com.