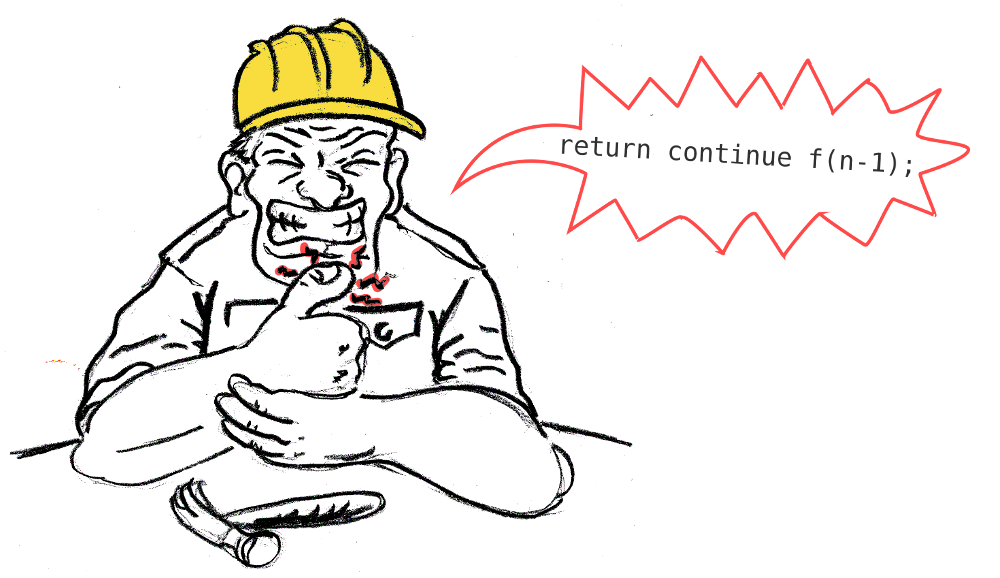 It is 9:18 AM on August 21, 2021. You have just finished eating your space-breakfast, and you’re ready to get back to work maintaining the web presence for Omni Consumer Products. After about an hour, you find your latest change fails an acceptance test. It turns out to be a bug in “RedactSelect”, an open source “multiselect” web component you’ve been using. Looks like it hasn’t been updated in years, owing largely to its maturity and stability. “No problem,” you think, “I’ll just fix the bug and fork it.”

…except the source code looks a little strange. It’s using the @ symbol in a way you’re not familiar with–almost like it was a private field. That can’t be, though, because private fields in ES2020 are denoted with a #. You check the project’s build process, and sure enough, it is built using a long-outdated “transpiler.”

You spend the next few hours making advanced web queries like, “babel 6.17.0 private field syntax”. Once you’re getting a handle on those semantics, you stumble across a bug report for the transpiler: at that version, it was outputting subtly-buggy code under certain conditions. Unfortunately, the fix didn’t come until the next major release which happens to be incompatible with “RedactSelect.”

It’s now 7:03 PM, and you still haven’t fed your robot dog or taken out the cyber garbage (much less completed the feature you were working on). You decide to cut your losses and just find a new component in the morning. The next few months are punctuated by bug reports for integration issues with the replacement.

Inspired by the Future

Now, you may be expecting me to request that you get off of my lawn. While I admit to being more conservative than some of my peers when it comes to new language features, I am by no means a curmudgeon! I’ve worked hard to extendTest262 (the official test suite for the ECMAScript standard) with the latest features, and I’ve collaborated with members of TC-39 (the standards body that shapes the JavaScript language) on the design of still more. I think the committee’s new yearly release schedule and tiered acceptance process are amazing improvements over its historic approach to publishing.

As a proposal matures, it passes through a number of “stages”, each designed to help spec authors, platform implementors, and application developers collaborate. Here are the expectations for a given proposal as it advances:

My concern is that, as an industry, we have not internalized the distinctions between these stages.

The Babel project has made it incredibly easy to write code using experimental JavaScript features. All it takes is the installation of two modules, and you can be writing doexpressionsright alongside standard syntax like switch statements and for..of loops. This amazingly low barrier has prompted many developers to adopt early-stage features across the board–from their one-off experimentsto their open source libraries, to the applications that drive their businesses.

So while the committee may make recommendations about when and how to use new constructs, for many developers, the only question is, “Is a plugin available on npm?” I’m reminded of a recent JavaScript users group meeting here in Boston. The presenter asked, “does anyone know which features were introduced in ES2016?”

“Function decorators,” came a reply from the audience.

“Not quite–destructuring binding was standardized in 2015.”

You might think I’m being a little academic here. Maybe it seems snooty of me to expect others to keep track of such technicalities… But downplaying the relevance of the proposals’ “stages” has two real dangers.

The Threat to the Ecosystem

The first (as described in the doomsaying at the onset of this post) is that, in our rush to build on top of an evolving platform, we fragment our infrastructure over time. I’ll point out the ironic value of the name “Babel”–a project whose widespread adoption has the potential to very trulyconfound the language.

This is not a new problem, though, and it’s something we’re already dealing with today. Consider jQuery, a library deployed to millions of websites. Up until June of 2016, it included an implementation of Promise that was not standards compliant. We seem to be getting by just fine despite this.

When the same class of specification violation occurs at a language level, though, the effect is much more severe. It is much harder to debug (or even identify) issues that arise from the code’s syntax (the correctness of which we generally take for granted) than those that come from libraries we interact with.

(This, by the way, is part of the motivation for the futurehostile option inthe JavaScript linter JSHint. The setting disallows the creation of bindings that are globally defined in future versions of the language. In addition to mitigating migration issues, it also encourages projects to explicitly label polyfills. For instance: when a library-providedPromiseconstructor is imported as BPromise, readers can build a much clearer understanding of the surface area for bugs.)

The Threat to the Platform

TC-39 operates based on the consensus of its members–an inter-disciplinary group comprised not only of researchers and runtime implementors, but practitioners from organizations like the JS Foundation, Tilde, Bocoup, andShape Security. As a result, consensus is derived not just from some idealized design, but from the realities of the industry. Take for example the following dialog on the subject of modules fromlast month’s proceedings:

Dave Herman: Design constraints: – It needs to be possible to import named exports from CJS – [using the require function to load an ECMASCript module] needs to [return] synchronously

Jeff Morrison: Are these technical needs or ecosystem needs?

James Snell: These are ecosystem needs. Babel today can do these things. Those users will want to be able to not change their code. If we say that doesn’t work, we’re violating a concern.

This demonstrates how user expectations push the committee to make difficult decisions. The more eagerly we build and deploy systems on proposed extensions, the more difficult it becomes for standards bodies to amend the design. Remember: it’s not “done” until stage 4! In extreme cases, this could lead to final designs that include sub-optimal aspects informed by “web reality.” That’s not a theoretic concern, either. Already, the specification devotes an entire sectionto the various irregularities that came about in this way.

These threats are credible only to the extent that we collectively adopt early-stage proposals. If we, as an industry, take a more conservative tack, then we don’t need to worry.

We might respond by refusing to use any syntax that has not been formally ratified by ECMA. In other words, “We won’t use ES20XX features until ES20XX is published.” In this case, all code across all projects would be fully standard-compliant at all times, and we wouldn’t have to worry about fragmentation or curtailing the design process.

Even if I thought anyone would listen to such a recommendation, I wouldn’t endorse it. Implementation feedback is a crucial part of the design process, so we very much need experimentation. Runtimes like V8 and Spidermonkey shouldparse and execute experimental syntax (though behind a flag); transpilers like Babel and Traceur shouldtranslate experimental syntax; application developers should write code using experimental syntax. It’s our best hope at honing in on more of the kinds of beautiful abstractions that make JavaScript so enjoyable.

If we instead develop an awareness of each proposal’s current “stage” and exercise some sensitivity to that status, then we can participate in the advancement of ECMAScript in a way that is both effective and responsible. This requires some nuance, so we probably can’t define any hard-and-fast rules. I can make some general suggestions, though:

There’s definitely some room for “fudging” between these stages; being dogmatic isn’t going to serve anyone. However, this strategy does have one aspect that we should consider non-negotiable: feedback. Developers who experiment with early-stage proposals have a certain responsibility to engage in the process.

So get out there and start experimenting: bind some functions, decorate some methods, and cancel some Promises. Use these early experiments to satisfy your curiosity and provide feedback, but please think twice before building your next product with any features not yet standardized.