We’re excited to announce the Voyager project as one of 22 recipients of a Knight Foundation Prototype Grant. The grant is designed specifically to support early-stage explorations in media and information aligned with Knight Foundation’s mission to support “transformational ideas that promote quality journalism, advance media innovation, engage communities and foster the arts.” The goal is to support the experimentation, learning, and iteration necessary for building out early projects to the next level.

This is our third Knight Foundation Prototype grant. Previously, we were able to create MobileVis, a collection of data visualization examples and patterns on mobile devices, and Open Gender Tracker, a toolset for computationally tracking gender in the news thanks to Knight Foundation’s support. 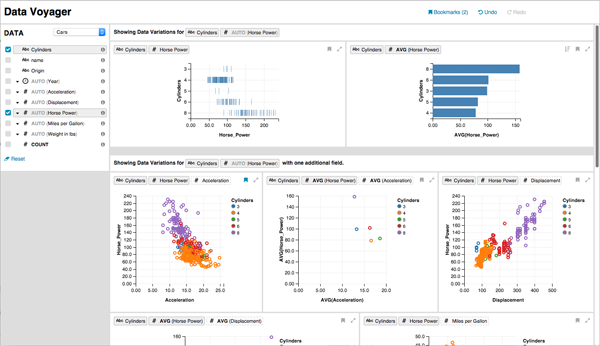 Voyager is a visualization browser for open-ended data exploration created by the Interactive Data Lab at the University of Washington.

The audience for Voyager includes everyone who has data they wish to explore visually to better understand it. We want to encourage data exploration for all, especially groups who may avoid data visualization due to its inherent technical complexity. We’re excited to help bring Voyager to the broader data visualization community and public.

Data visualization tools that enable custom exploration are a luxury for most practitioners. They often come with the burden of expensive license fees and tend to be close-sourced technologies that cannot be extended, customized, or modified in any way by its users. We are excited to work towards expanding the space of visual exploration tools and bridging the gap between data science and visualization.

Collaborating with the Interactive Data Lab at the University of Washington

The Interactive Data Lab team at the University of Washington (previously the Stanford Visualization Group) has been leading the charge to democratize these tools for practitioners. Among many significant projects, their contributions include: Lyra, a powerful interactive environment for visualization design, Vega, a full declarative visualization grammar suitable for expressive custom interactive visualization design and programmatic generation and d3.js, a JavaScript library for manipulating documents based on data. We’re thrilled to be working together with them to improve Voyager and bring it to more users.