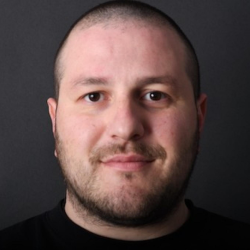 Boaz founded Bocoup in 2009, and manages the company’s product strategy and new business today. Along with day-to-day work at Bocoup, Boaz is on the Design Justice Network Steering Committee, and Processing Foundation Board of Advisors.

From 2017-2021, Boaz was an affiliate of the Berkman Klein Center for Internet and Society, where he contributed to a critique of the values embedded in “open source” production, and joined both the Ethical Tech Collective, and Uni Global Future World of Work Lab. Between 2016 and 2017, Boaz ran a contemporary art gallery with a focus on tech criticism. During this time he curated works from artists exploring the role and impact of technology on society.

Boaz has contributed to various web standards and software projects. From 2011 until 2017, Boaz was an invited expert to the W3C where he started the first community group for web games, and helped conceive of and develop the Web Platform Tests. During this same period, Boaz worked on the web video programming tool Popcorn.js, and supported the p5.js project. Boaz also contributed to early web application developer tools like Grunt, and Backbone, helped write the jQuery API documentation, and start the jQuery Foundation, where he served as a board member until it was taken over by the linux foundation. Before Bocoup, Boaz was a front-end developer for an early 2000s internet health company, where he built early client side web video applications.

Moving forward with the Open Web

Exploding Your WordPress Theme with CSS3

Using dataTransfer and other HTML5 event properties with jQuery Events